"The University of Illinois at Chicago Library seeks a dynamic and energetic librarian to provide reference, research consultation/user education services for cartographic material and social science data sets, as well as implementation of GIS applications within the library and the university community."

There sure seems to be a need for good GIS folks in Illinois, eh? Last week, I posted the newly available position at the University of Illinois Library at Urbana-Champaign, and now there is a similar opening in Chicago.

As this position's title suggests, the posting describes this position as a mixture between GIS, traditional cartographic materials, and data/numeric services. However, there does seem to be a strong focus on the social sciences. 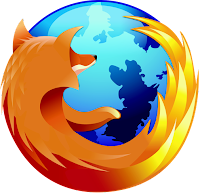 Lots and lots of fantastic mapping extensions for the Firefox browser. Which ones, you ask? Well, the 16 extensions listed below.

There are also a couple of extensions that allow users to back up all the extensions installed in their browser and package them into one .xpi extension file. The extensions are Firefox Extension Backup Extension and its partner Compact Library Extension Organizer.

So, I used FEBE and CLEO to backup and package all of the extensions in the following list into one convenient .xpi extension file: FFmapping.xpi. Install this file and you will have just about every Firefox mapping extension that I am aware of...Well, those that are compatible with Firefox 2.0 anyways. Now, the server might not be configured properly for direct extension installations, so you might need to download the extension first (right-click/save as), and then File/Open and browse to the file. This will get it installed.

Why use Firefox over IE? Well, here is one reason. 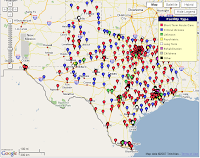 The American Hospital Directory (AHD) now supplements their public hospital data with Google-powered maps. I (and many of our health care researchers) have used AHD for hospital data, but the ability to access and view the hospital data through maps is fantastic and so very useful.

Check out their map of the 596 Texas hospitals in their database.

Hospitals are broken up into 8 categories:
Great data is provided for each hospital, including revenue, number of beds, discharges, type of service, inpatient origin, financial statistics, and more. There are a number of subscription services available on their site, but this free data is great.

"The University of Illinois Library is seeking an energetic and creative person to serve as the lead in the Library's collection and delivery of digital geospatial data and associated geographic information systems (GIS) services. The GIS Librarian will coordinate all aspects of the Library's digital geospatial information program at the intersection of user needs, technology, and data content. Creating a portal to geospatial data, the GIS Librarian will move the profession and services offered from traditional map librarianship towards geoinformatics with an increased interest in modeling geospatial data and in techniques applied to geospatial information systems for data management, retrieval, and analysis."

What a position! I have not posted a position here in a while as my regular blogging habits gave way to the business of this semester, but this position seems so exciting that I can not help myself... The folks over at Urbana-Champaign sure know what it takes to define the role of a GIS Librarian. If anyone out there is unsure about such a role, this job announcement is a fantastic concise summary.

Here are some snippets from the job announcement:
There is no specific mention of a salary here, but considering the requirements and the high research level of the university, the salary should be nice.
Posted by mapz at 4/17/2007 04:30:00 AM 3 comments: 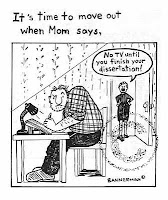 Attended the Association of College & Research Libraries (ACRL) Annual Conference a couple of weeks ago. There were a few mention-worthy poster sessions and vendors related to mapping and datasets and I will outline these here.

Census 2010 is right around the corner, folks.

Have been hearing numerous faculty and students anxiously awaiting for fresh new Census data, as the 2000 data has gotten quite stale and the taste of marketing estimates is never as satisfying. However, the joyous party times we experienced during the early 2000's as summary files 3 and 4 were being released are not to be repeated this time around. As I will discuss below, this has huge implications for all users of demographic data and this in turn will have a huge affect on my role as GIS Librarian.

So, the US Census has gone and submitted the subjects for the 2010 Census to Congress. There will be only 6 subjects. The data for these subjects is planned to be released on the Census block level on April 1, 2011. Here are the 6 subjects:
What?

How about the long form questions? How about income, education, citizenship, all those housing characteristics? Since 1960, sample data has been collected on the Census long form sent out to 1/6 households containing oodles of data. Data that I and many others have come to rely upon.

There will be no long form questionnaire in 2010. To cut costs, the US Census Bureau is now relying on the American Community Survey (ACS) instead of the decennial census to provide all questions previously on the long form.
This is not good news, especially in the short term. I have a big problem with the ACS replacing the long form data previously released each decennial census since 1960. The implications scare me.

Let's Take a Closer Look at the ACS

The American Community Survey last year began providing access to annual estimates of various demographics for all cities (places), counties, congressional districts, school districts, and states in the US.

Now, the upside to the ACS as compared to long form decennial census data is the timeliness. No longer will we need to wait until next decade to find the median household income for our fair city of Arlington. The ACS will release this data annually.

The downsides, however, are quite steep. First, the ACS is currently releasing data down to the county and city level. It is extremely rare that our students here use census data on any level other than block, block group, tract, or zip code tabulation areas. However, according to Chris Williamson, Ph.D., Senior Planner for the City of Oxnard, California, on the latest Planetizen Podcast (which is efficiently informative), as soon as the ACS has accumulated enough data they will begin releasing data on the tract level. In am uncertain when. Regardless of when, we have all been enjoying long form data down to the block group level.

Second, the margin of error for ACS data can be quite high. When using ACS data, it is imperative to consider the margin for error that is provided for each attribute for each geography. Now, Dr. Williamson (Planetizen Podcast) stated that the accuracy of ACS data will improve over time, but for the short-term this is what we have.

ACS Data can be accessed via Factfinder, FTP download, and as data briefs (URL fixed)

Two Ways This Will Impact GIS At My Campus
Now, I understand the Census Bureau (which means us, the taxpayers) is saving money by shifting from the decennial long form to the American Community Survey, but is it really worth it. Perhaps if I knew the amount of the savings it would make more sense to me. There are a whole lot of bright folks working at the census, and I reckon if they decided this is the best thing to do, then perhaps it is.
Posted by mapz at 4/12/2007 07:57:00 PM 5 comments:

Want to discuss this political science student's work to show an example of the effectiveness of our library's GIS workshop program and our endeavor to create customized tools to increase the access and attractiveness of geospatial resources.

Have been working this semester with Charles Jackson, an enthusiastic political science student to develop an interactive map for an undergraduate public affairs course. Charles, (who gave me permission to discuss his project here), first attended the Google Maps workshop I held earlier this semester. He was so excited about the idea of creating an interactive map that he spent countless hours (at least 80) in the GIS lab learning how to access business location information, various demographic datasets, pull them all into ArcMap, and create an interactive map using our ArcMap2GMap script. I tell you, his enthusiasm was so infectious and always got other students (at nearby computers) and myself excited as well. 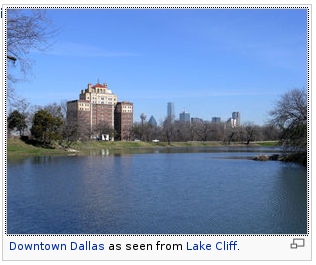 Oak Cliff is an old neighborhood south of Dallas, and Charles is working to develop a revitalization plan. The Oak Cliff Interactive map is the community services component. He explained to me numerous times that there has never before been a comprehensive analysis of the services/resources available to Oak Cliff's residents. This interactive map allows users to view various business, non-business, and housing facilities in Oak Cliff. If an address is geocoded, the 10 closest facilities of each visible facility type is listed, along with links to driving directions.

Hopefully, the professor will be impressed enough to begin encouraging future students to integrate geospatial resources within their projects. I will follow up with the professor and see what happens...
Posted by mapz at 4/09/2007 09:00:00 AM 11 comments: 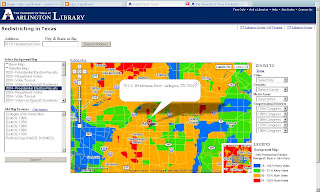 So, where did all of this great data come from? Mostly from the Texas Legislative Council's Redistricting FTP Site. Note that Firefox has some issues with this FTP site, so if you use a browser to access FTP, use IE. For more details about data sources, see the workshop handout, which is basically a bibliography of relevant data sources.
Posted by mapz at 4/06/2007 09:27:00 AM 2 comments: