ArcMap2GMap Fixes: Thanks for Feedback!

After releasing ArcMap2GMap a couple of weeks ago, two persistent bugs have repeatedly been pointed out by users. I want to document these errors and the fixes, both of them quick, here. The script has been updated on the ESRI ArcScripts page with these fixes, so a fresh download should resolve these issues.
Bug #1: Process Status Message Not Appearing in ArcGIS 9.2
Bug #1: String Length Limitation While Passing to Geoprocessor
I surely do appreciate all the feedback!

Twenty-four points were used to test the positional accuracy. The calculated RSME ratio was 0.3344, and the normalized elliptical error table was used to determine error at the 95% confidence level.

Twenty-four points were used to test the positional accuracy. The calculated RSME ratio was 0.609, and the normalized circular error table was used to determine error at the 95% confidence level.

Ten points were used to test the positional accuracy. The calculated RSME ratio was 0.400, and the normalized elliptical error table was used to determine error at the 95% confidence level.

We have been undertaking a project, called the Texas Time Machine (TTM), which requires us to georeference statewide historic maps of Texas.

Preparing historical materials for use within GIS for geographic analysis requires a large time commitment and high level of expertise. Once prepared, the researcher still needs to understand the fundamentals of operating a large desktop GIS application. TTM resolves this by (1) compiling a collection of prepared historic materials, and (2) enabling interaction with these materials within Google Maps and Google Earth (as well as desktop GIS applications).

I want to focus this post specifically on how we are georeferencing 150 year old maps whose geography encompasses over 250,000 square miles.

Georeference Scanned Map Image
NSSDA & Historical Measurements
We are adhering to the National Standard for Spatial Data Accuracy (NSSDA). The two primary resources we followed are:
Both resources can be accessed here.

The first work above provides a general overview of the process and specific case studies where one can learn by those examples. There are two cases for measuring horizontal accuracy.
Our Geographic Accuracy Measurement Procedures

"Bucknell University seeks to hire a Geographic Information Systems Specialist for the Library and Information Technology organization... The primary responsibilities of this position are to develop, expand, and support a GIS user community by assisting students and faculty in the selection and use of appropriate GIS technologies; working with faculty and students in designing and executing projects using GIS; and providing instructional support in GIS."

While this position does not have the title Librarian and while a library degree is not required, this sounds quite similar to my responsibilities here. And, of course, this position does indeed reside in Bucknell's Library. With a salary of $40,000 - $60,000 this position sounds pretty fantastic for a GIS professional looking for an academic position.

Some snippets:
This really sounds like an exciting position. We are continually increasing the numeric (non-spatial) data services and positions such as this one which straddle both numeric and spatial data services are the thing of the future. My opinion is that GIS technology is becoming more and more commonplace and within 5 years (or so) it might not be so necessary to maintain a professional strictly in GIS or strictly in non-spatial statistics. Great long-term opportunity for a highly experienced librarian.

Specific salary benefits are not mentioned, and considering the cost of NYC especially someplace wiothin an easy commute this perhaps will be a huge factor.
Posted by mapz at 8/28/2008 04:45:00 PM 50 comments:

ArcMap2GMap: download
+ (not yet tested for 9.3)
Samples:
+ Presidential Election Data 2004
+ Hodge Podge Sample of Stuff From My Computer
+ Health Resources

Finally completed a major update for the ArcMap2GMap script that exports ArcMap layers to a standalone Google Map webpage.

This latest update now includes support for choropleth polygon layers using the gPolygon object. Previous versions included support for point and line geometries. The choropleth map is hard-coded to generate 4 equal interval classes based on the attribute selected by the user, but we do have plans on providing more flexibility with this in the future. I want to whole-heartedly thank my GRA, Shivkumar Chandrashekhar, for all of his assistance with this project.

This version includes all features of previous versions, including:
Students at our university are restricted from registering DLLs, so we could not compile the VBA forms. This means the MXD provided in the download must still be used.

The major issue we needed to resolve to include this polygon support was the complexity of the vertices in a polygon shapefile. Even the simples polygon shapefiles may have thousands of vertices that will timeout any browser on virtually any computer. We have two point reduction methods in place to help resolve this.
We are holding an open workshop on campus on September 24. If anyone tries out the script and has any comments, please leave them here or if you do not want them on the permanent blog record, leave them in the IM client to the right.
Posted by mapz at 8/28/2008 10:29:00 AM 65 comments:

As always, there are oodles of great GIS-related theses and dissertations out there. After taking a long and deep gander at the latest batch, here are the latest ones to have caught my eye. For previous installments, click here. 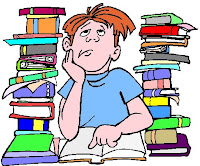 Been working my fingers to the bone teaching 9 credits last Spring, 6 credits this Summer, and getting ready to teach 6 more this Fall (next week, gulp!).

This past Summer was exciting and really stood out, however, as many of the final projects from both courses were exceptionally great. I taught Seminar: Advanced GIS Topics for Real Estate Research and Understanding Geographic Information Systems (an intro to gis course).

Real Estate Project Highlights:
Understanding GIS Project Highlights
Like I said, this was a most excellent summer in terms of the quality of student final projects. There were of course many other great projects, but these are the six that stick the most in my head at the moment. ;)
Posted by mapz at 8/23/2008 02:13:00 PM 34 comments: 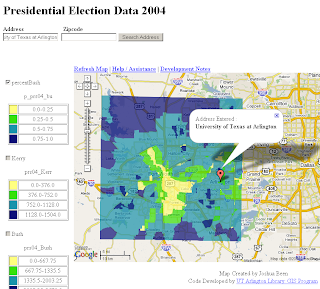 One of the three GIS workshops we have planned for the Fall 2008 semester is entitled 'Predict 2008 Voting Patterns Across Neighborhoods in Texas'. It is not scheduled until late October, so it is oh so far from being done, but here is how we are planning to go about it.

By Texas neighborhoods, I really mean that each workshop participant will estimate how voters will vote in each Voter Tabulation District (VTD) in Texas. This can be then grouped to form neighborhoods, especially in urban areas.

There will be three parts to the exercise.
Of course, this will all be automated using a combination of Python scripting and the Model Builder. so participants can concentrate on their research and the enormous potential that GIS lends to this type of analysis.

It is scheduled for one week before election day, so we are hoping this hot topic will be a further draw for students and faculty. 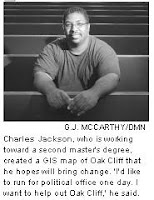 This recent article spotlights student Charles Jackson's use of GIS in an undergraduate project on the Oak Cliff neighborhood in Dallas, Texas. Charles is a student I assisted with on may GIS projects. For this one in particular, he used GIS to create a Google Map webpage of various resources available in this low-income area. Charles' online project is entitled Oak Cliff Interactive.

Background information about this project and the technology used can be found in a blog entry I wrote last year.
Posted by mapz at 8/19/2008 07:40:00 PM 27 comments:

So, it has been a long, long while since my last post here. Why? Ah, oodles of reasons. Most of all, I just kicked a 9-month compulsive WoW habit that impeded and threatened many facets of my work and personal life.

To those of you out there who were negatively affected by my obsessive gaming habits, I sincerely apologize. To everyone, I fully intend at this point to resume writing on this blog and others as it is a great pleasure to me. I have been quite busy working on numerous GIS projects and teaching various classes, so there are loads of good stuff to write about.
Posted by mapz at 8/19/2008 07:29:00 PM 22 comments: